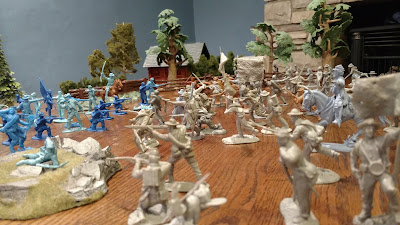 Battle of the Bulge Diorama

An overview of the Battle of the Bulge diorama my son and I assembled back in the day. 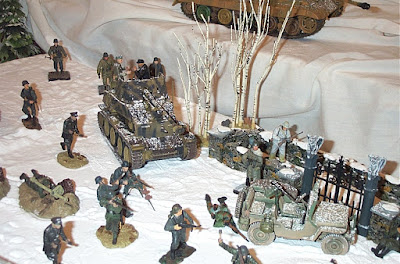 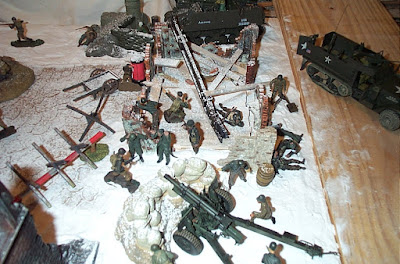 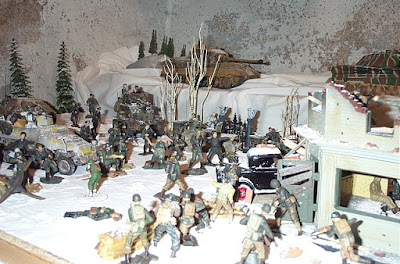 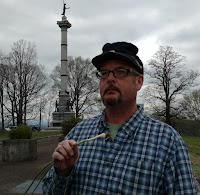 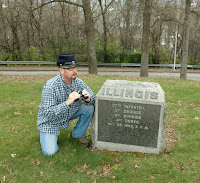 These photos were also taken at the Bragg Reservation. (The term "reservation" denotes those small swaths of the battlefield that the feds were able to preserve as the ridge was being devoured by residential development. The Bragg Reservation is by the far the largest of these patches, and rests on the site of Rebel commander Braxton Bragg's farmhouse headquarters during the November 25, 1863 battle. A native of the prairie state, I always - when visiting a Civil War battlefield - have my photo taken whilst posing, with my Union kepi, by an Illinois monument. In the center pic, I'm holding a fairly sizeable wild onion that I plucked from the battlefield.﻿
Posted by Basil Duke at 12:32 PM 1 comment:

Basil Duke, posing in front of the magnificent Illinois monument located on the Bragg Reservation atop Missionary Ridge outside Chattanooga, Tennessee. Braxton Bragg's headquarters were located a few hundred feet behind the monument. 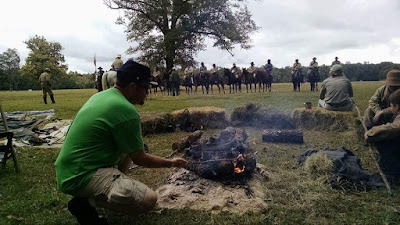 In the last three years, my lady friend and I have visited Shiloh National Battlefield three times, and made single trips to Stones River, Chickamauga, Corinth, Missionary Ridge and Lookout Mountain. The rakish rogue in the foreground of this photo, wearing an authentic wool and leather Union kepi﻿ and an abjectly non-period t-shirt and cargo shorts, is your blog host, Mr. Basil Duke. This picture was taken during our second trip to Shiloh. We timed our visit to coincide with the appearance of a troupe of Rebel cavalry re-enactors who camped all weekend on the battlefield proper, and gave several demonstrations of maneuvers and skirmishing tactics each day. The gray horsemen kindly permitted me to use their campfire on which to toast the chunks of salt pork that I brought from Missouri for that express purpose. It was indeed a surreal experience to cook and consume authentic Civil War victuals on such hallowed ground.

Posted by Basil Duke at 7:59 AM No comments: 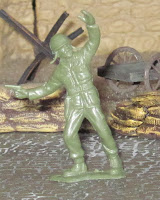 As time permits, I'll take a fond glance back at Marx's olive drab heroes, who, '72 Dolphins-like, passed through the entire season of my boyhood without a single defeat. On carpet or staircase and in garden or sandbox, these troops achieved a career win-loss record of something like 1,459-0 against both the Empire of Japan and the Third Reich.  In terms of pure fighting potential, Marx's G.I. molds yielded more killers than its German crop - including a machine gunner, bazooka man, knife fighter, prone B.A.R man, etc. But they also produced a wide variety of soldiers who weren't strictly (or even remotely) poised to mete out instant death to America's plastic enemies. The leader of Marx's G.I.s can be seen at right. Likely a captain, he mustered in with Basil Duke's Corps D' Elite in the mid-'70s, in The Guns of Navarone playset. "C'mon, men! Follow me! We've got to get off this #@$&* beach!!!" he yells. I was always particular to this fellow; I like his gesturing arm and the fact that his helmet's chin straps are realistically flapping away from his head. Plus, the pose in its entirety radiates "Leader." Too bad, though, that our captain's head couldn't have been turned more to the front, so that he looks directly at whatever he was about to empty the magazine of his under-sized .45 "Model '11" into.

With one, late-to-the-party exception, a blank page represented the American Revolution in my toy soldier life book. For years, particularly in the two months preceding my birthday and Christmas, I hyperventilated over the Sears and J.C. Penney’s catalog playset pages much as I would Playboy magazine a few years later. But, in panting over the three or four pages of 54 mm heaven marketed in the catalogs, I was never tempted by Marx’s “Sons of Liberty” – and stuck resolutely to The Big Three: World War Two, Civil War and American West, with a dash of The Alamo and Knights and Vikings thrown in for variety.


But as I neared the end of the kid trail, a magical little army of Swoppet-style British grenadiers and Colonial ‘rebels’ snared my imagination, and left me a wonderful clutch of memories. The sculpting was somewhat less than refined, and the soldiers rather wooden of limb, but I played with them for hours. The figures in question – marketed as “The Men of ‘76” - were released to commemorate/cash in on the country’s bicentennial, and could be purchased in blister packs that contained from two to five figures. Accessories included double-trail brass cannon and, more significantly, a large, ‘stone’ structure – “Fort Liberty” - that bore a passing resemblance to Fort Ticonderoga. I acquired them all.


Regrettably, ‘Fort Liberty’ vanished down the same rabbit hole as my original Fort Apache block house, but I still have the figures and cannon. 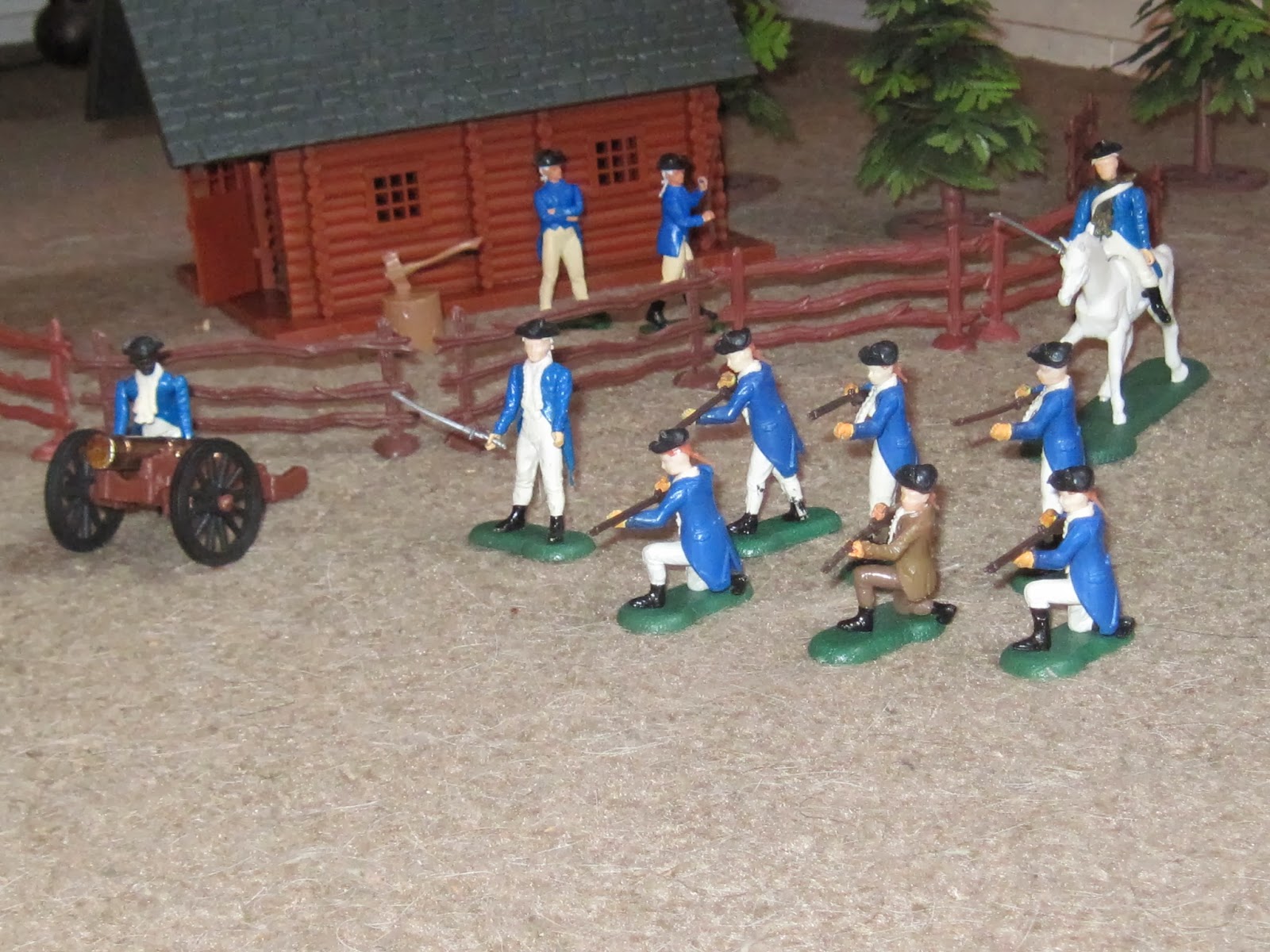 "The Men of '76," in firing formation. Note the race of the cannoneer - a nice touch. And a rare one. A couple of actual Swoppet patriots can be seen yonder, behind the fence. These fellows were simply too expensive to purchase in bulk. 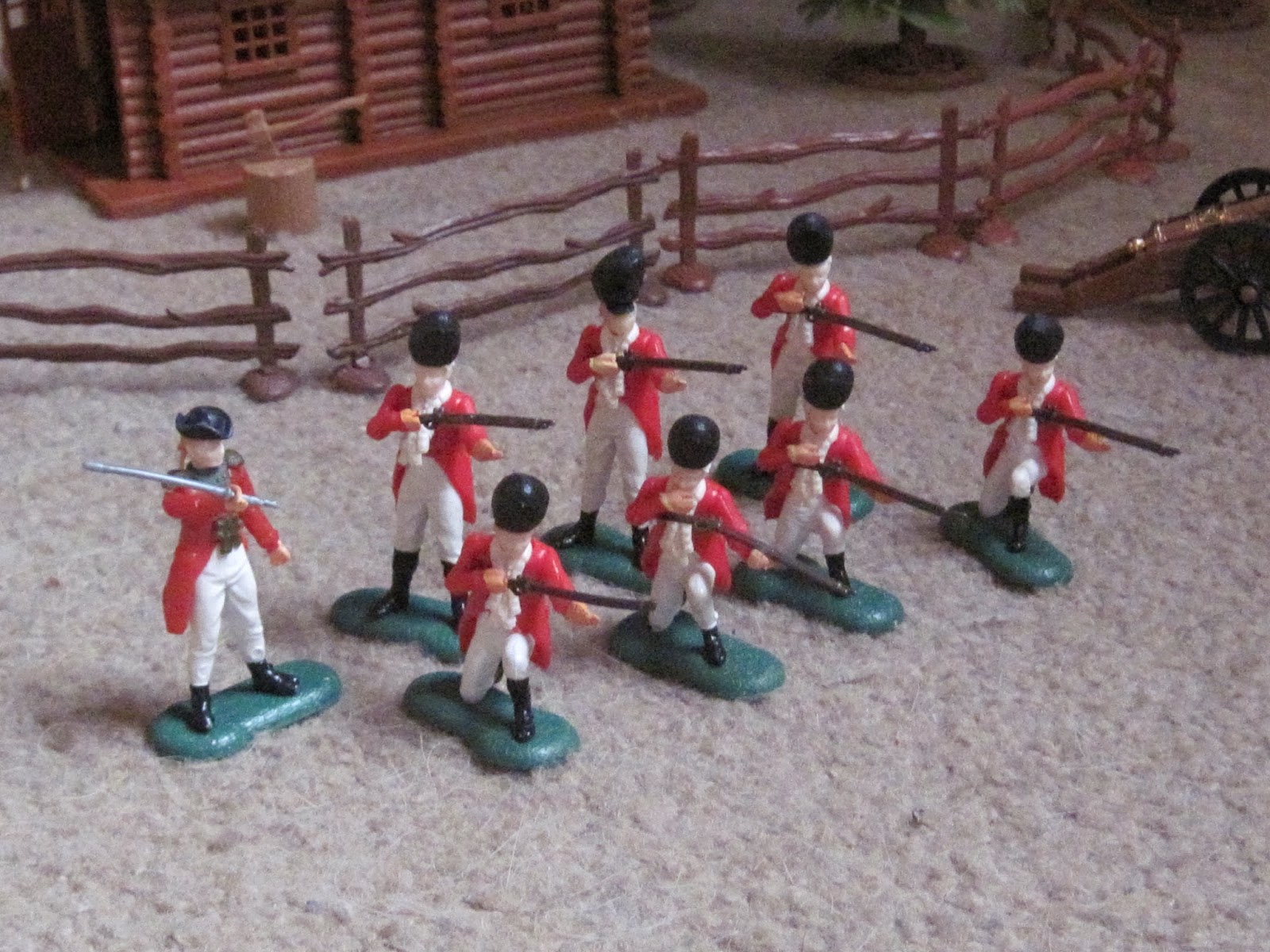 King George's elite infantry prepare to chasten the upstart rebels with a volley of their own. 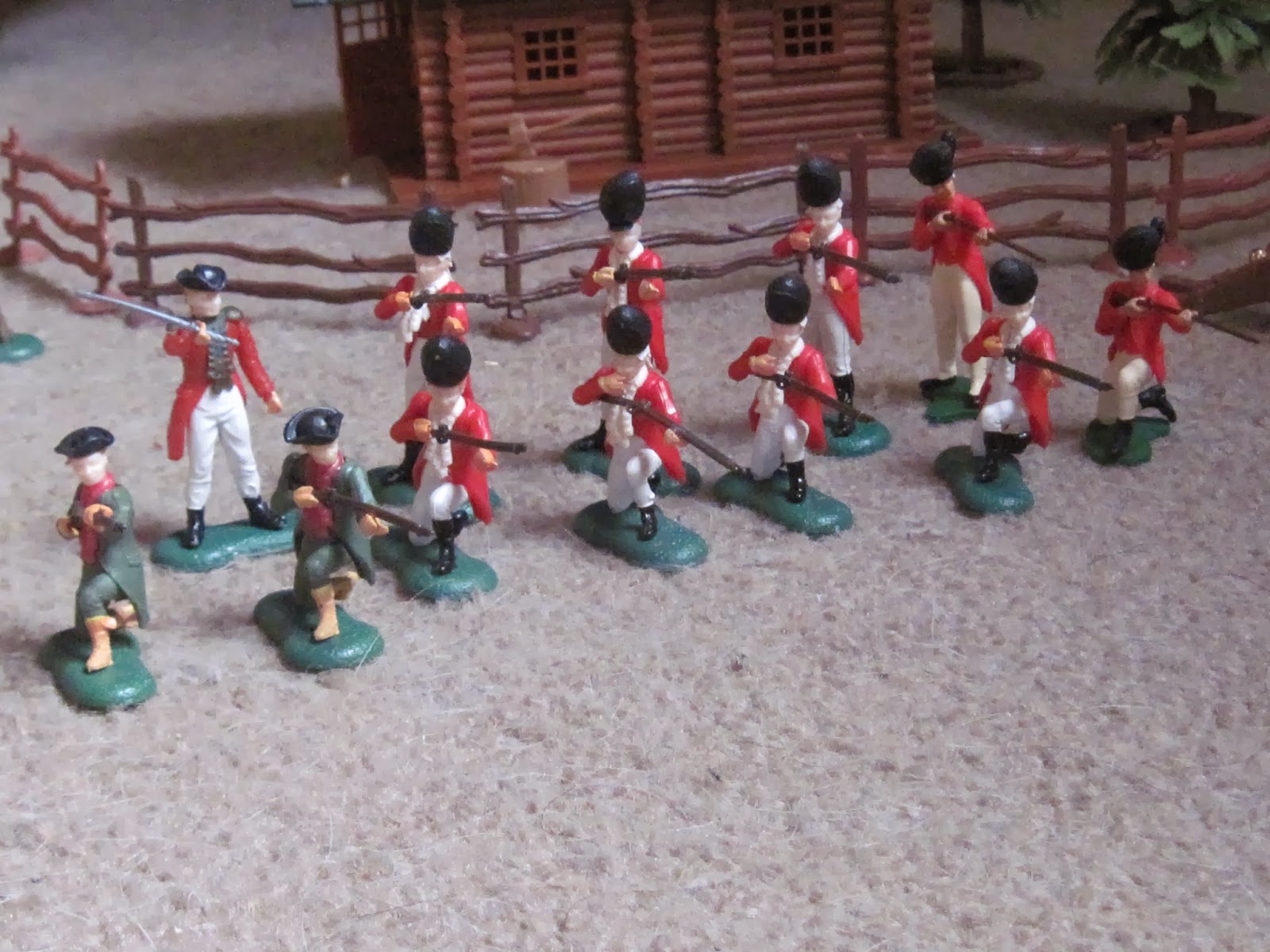 "The Men of '76' also featured Hessian mercs, which were depicted in forest green breeches and coats. On the far right, Swoppet figures add a bit more class to the organic set. 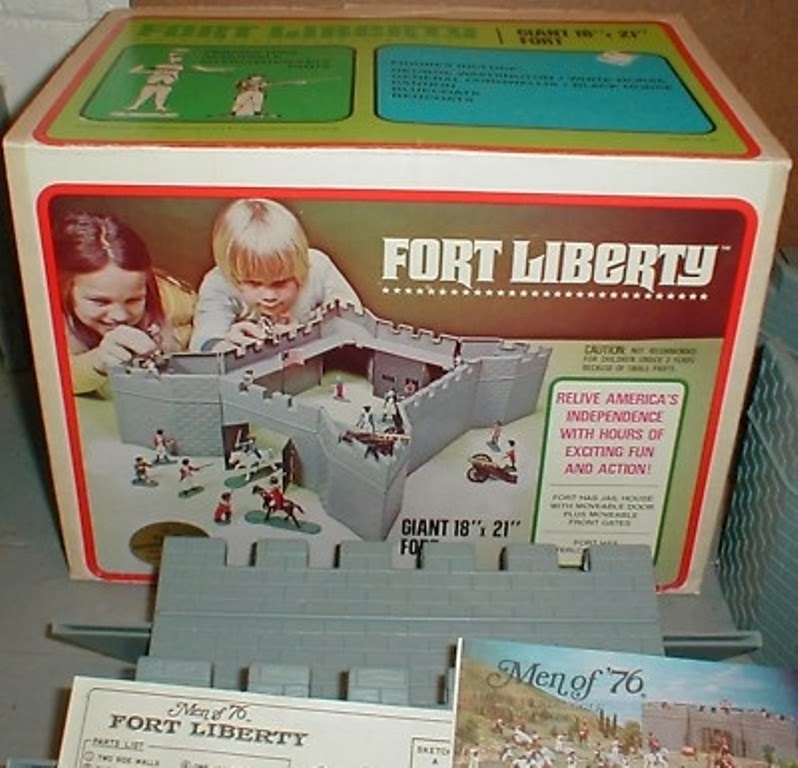 As found on Ebay: "Fort Liberty' and its original box. Both the fort and the towhead's bowl cut took me right back. 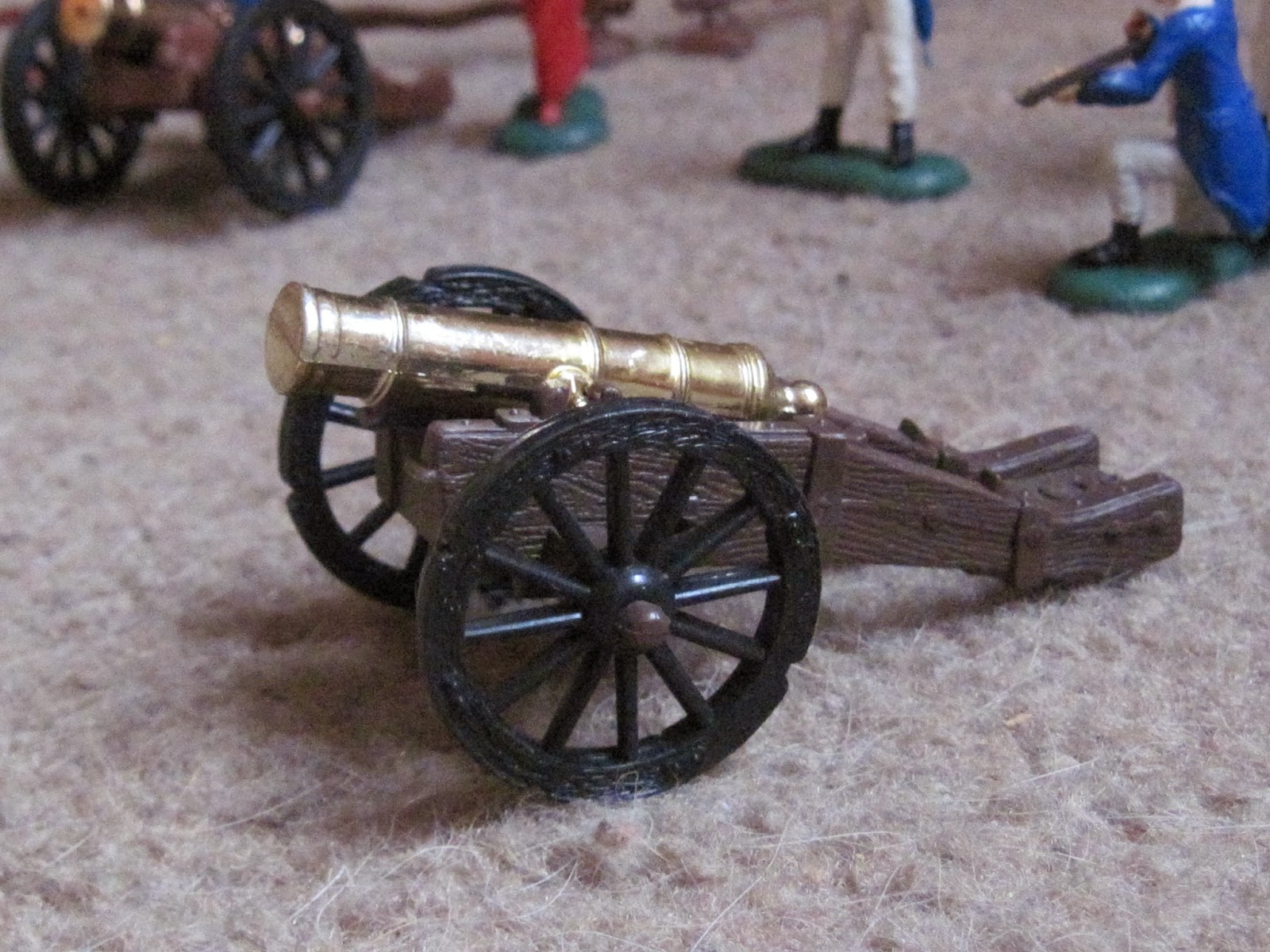 A close-up of the cannon. This is a well-detailed little piece, and can be used in pirate battles, The Alamo, War of 1812, Napoleonic combat, etc. I have five of them. 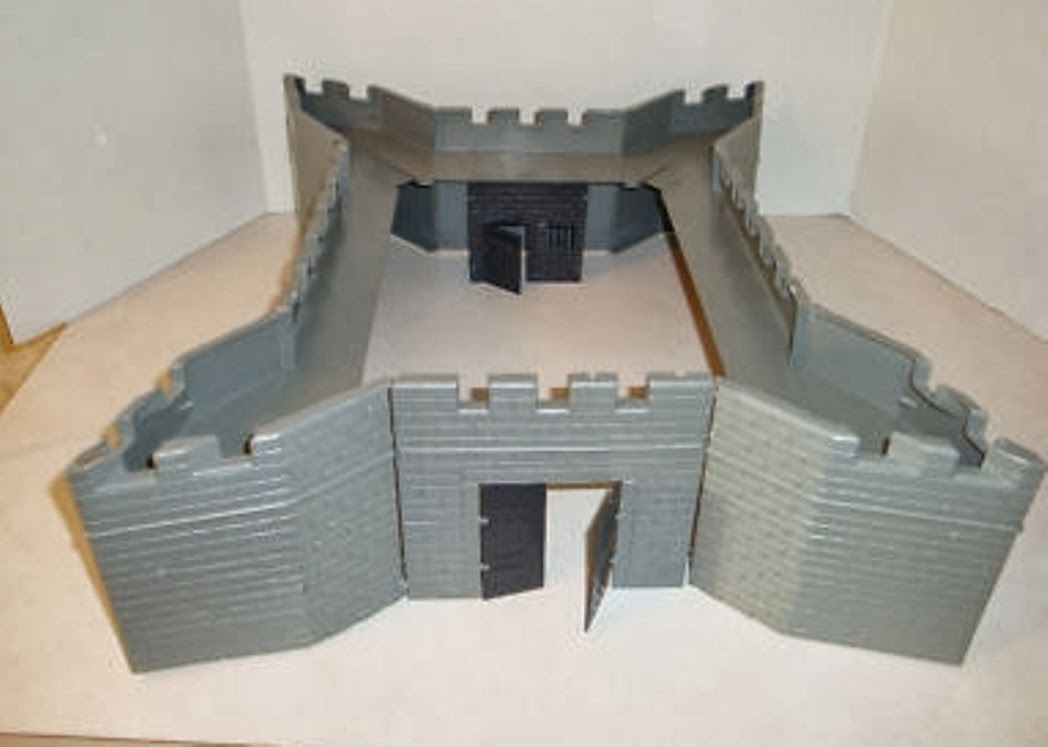 "Fort Liberty," from another Ebay listing. Note the jail at the opposite end of the structure. 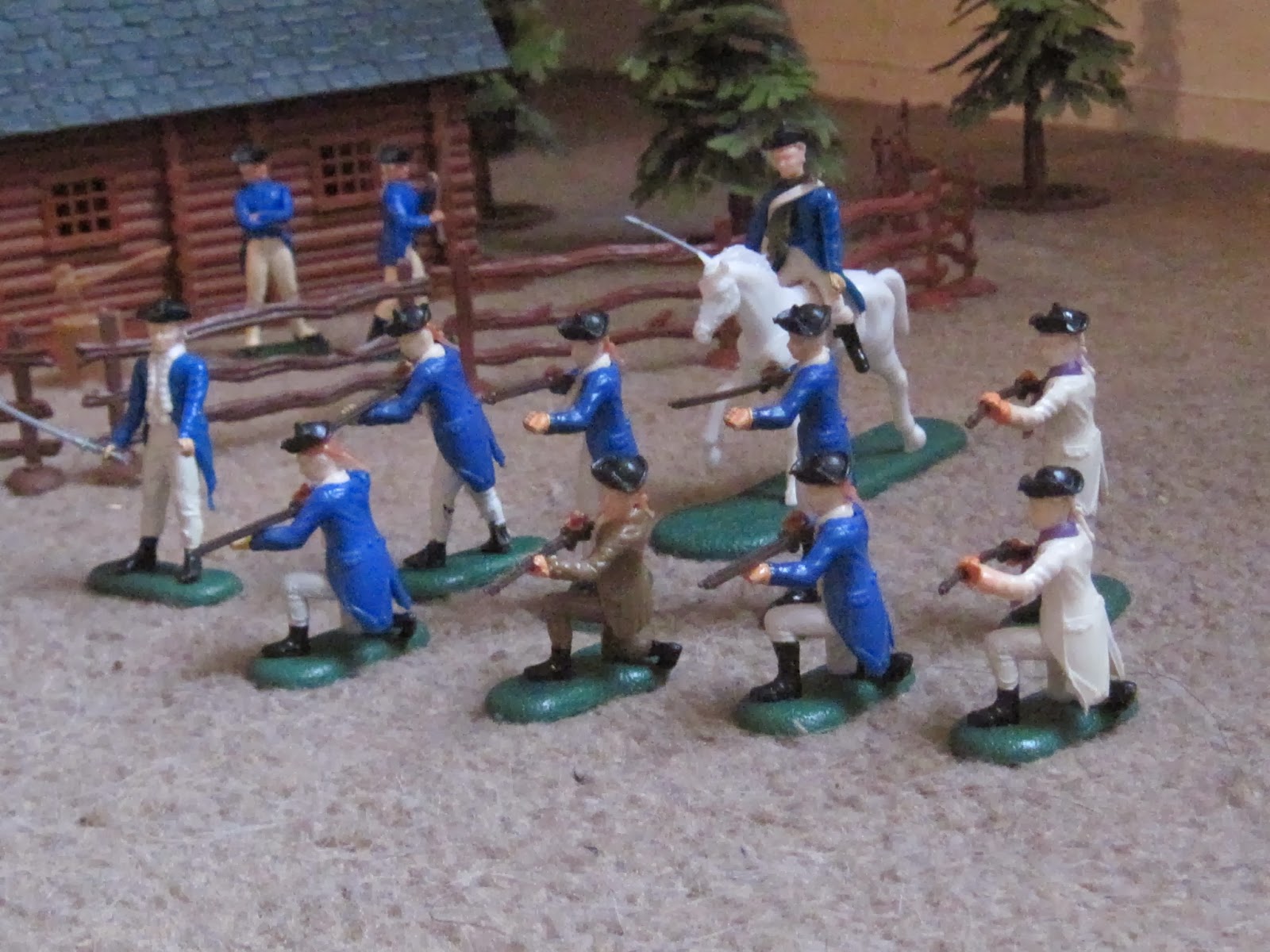 To counter the Lobster Backs' Prussian-born hired guns, the Colonials fielded a smattering of French regulars - seen on the far right, in white coats and breeches (and royal purple collars).
Posted by Basil Duke at 1:35 PM 4 comments: